That Deposition Notice Could Get You Punched In the Face 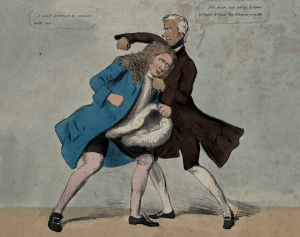 California lawyers just got dropped down in the middle of a fistfight. It may not be their fight, but things could get ugly if they do not pay attention.

A dispute over court reporting business practices has resulted in the addition of two new rules concerning what goes into deposition notices. Understandably in light of the droll subject matter, the rules appear to have flown under the radar. But without any awareness of the rules or where they came from, many lawyers may soon be copying and pasting their way into a rules violation.

Lawyers ordinarily give deposition notices very little thought. Start with some formulaic notice language, add the date, time and location of the deposition, and tweak with any applicable statements about using video or live transcription. Voila! Even better, just have your assistant copy the relevant language from an old deposition notice.

As of January 1, Assembly Bill 1197 adds section 2025.220(a)(8) to the Code of Civil Procedure. Under that section, deposition notices now must include:

(8) (A) A statement disclosing the existence of a contract, if any is known to the noticing party, between the noticing party or a third party who is financing all or part of the action and either of the following for any service beyond the noticed deposition:

(i) The deposition officer.

(ii) The entity providing the services of the deposition officer.

(B) A statement disclosing that the party noticing the deposition, or a third party financing all or part of the action, directed his or her attorney to use a particular officer or entity to provide services for the deposition, if applicable.

Before diving into the particulars of these two new requirements, it helps to know the history behind them.

The Battle Over Contracting

For many lawyers, this will be their first exposure to a long-running dispute between competing factions in the court reporting industry. The dispute centers on a business practice known as “contracting,” whereby a company enters into a preferred provider contract with a court reporting agency, giving it set contractual rates for things like per-page deposition transcript fees.

“Where’s the controversy in that?” you might ask. Law firms commonly exercise their buying power to secure preferred provider contracts with all manner of legal-related service and software vendors.

In the court reporting industry, the fight mostly boils down to competition between large and small agencies. Contracting agencies typically are larger companies that can cover depositions across numerous jurisdictions. Smaller, non-contracting agencies object that such contracts unfairly allow the larger agencies to lock up a large amount of business by giving low rates to the party hiring the agency while simultaneously shifting costs by setting higher rates for parties ordering copies of the transcript.

This battle has been fought for over two decades, with court reporting organizations leading the fight against contracting. In some states, they have succeeded in passing laws limiting or banning contracting practices entirely. In response, contracting firms have pursued antitrust challenges to those rules.

AB 1197 is the latest skirmish in that battle. Unlike some prior efforts, though, it thrusts lawyers who hire court reporters into the middle of the dispute by imposing new disclosure requirements. The proponents of AB 1197 hope that the opposing parties will be able to use the information that’s disclosed to object to being treated differently, thereby (presumably) pushing those contracts out of favor. Indeed, the original version of AB 1197 included a provision allowing the party receiving notice to serve a formal written objection in response, but that provision was removed.

Regardless of how we got here, California lawyers now have to come to terms with what the rules require.

Breaking down the new requirement in Section 2025.220(a)(8)(A), there has to be a contract between (a) the “noticing party” or (b) a third party paying for the action (e.g., an insurance company), and either (c) the court reporter or (d) agency. The contract has to be for any service beyond the noticed deposition, and has to be known to the noticing party.

This provision raises at least two questions of interpretation. First, who is the “noticing party”? On its face, that term appears to refer to the client itself, especially because parallel language in subsection (B) distinguishes between the “party noticing the deposition” and “his or her attorney.” The Senate Floor Analysis for AB 1197 supports that interpretation, citing the proponent’s argument that “AB 1197 will simply require that the attorney preparing the notice [disclose] . . . whether there exists a contract between his or her party-client and the reporting firm being hired to transcribe the deposition.”

Identifying who the noticing party is has some significant consequences. If the client is the noticing party, the “if any is known to the noticing party” clause points to the knowledge of the client. That clause may apply, for example, if an insurer has a contract with the court reporting agency but the insured client does not know about it. It would be no excuse, though, to argue that the lawyer lacked knowledge if the client in fact knew about it. As a result, Subsection (A) in effect would impose a duty of investigation upon lawyers: to avoid a violation, lawyers have to ask their clients whether any contracts covered by its terms exist.

On the other hand, if the lawyer is the noticing party, Subsection (A) may provide a limited safe harbor. If a client does not disclose its contract with an agency, its lawyers likely can point to the “if any is known to the noticing party” clause and argue they were justified in failing to disclose the contract because they had no knowledge of it.

In light of the ambiguity, the safest conclusion may be that “noticing party” includes both the client and the lawyers representing it, such that any contract with an agency must be disclosed, whether it is with the law firm, client, or insurer. At the very least, it would be safest to assume that there is no safe harbor for attorneys who lack knowledge of their clients’ contracts.

A second question of interpretation is what kind of contract must be disclosed. A contract for “any service beyond the noticed deposition” certainly would include things like free repository services provided to the noticing party. It likely would include a contract to provide services in subsequent depositions in the same case, or even for entirely unrelated cases. It could even cover oral agreements.

So, for example, let’s say you represent BigCo in an employment case and, per your usual practice, your assistant calls your favorite court reporter, Billy Reporter, when it is time to schedule your first deposition in the case. Billy works exclusively with ABC Court Reporters. No one told you that BigCo requires any particular court reporter or agency, so you proceed under the assumption that you are free to hire anyone you want. Unbeknownst to you, BigCo agreed three months ago as part of a joint defense group in a securities class action handled by a different firm to hire ABC Court Reporters for the depositions in that case. According to Subsection (A), you probably have to disclose the existence of that contract in your deposition notice.

The second new requirement in Section 2025.220(a)(8)(B) is more straightforward. If a lawyer is directed to use a specific agency or court reporter, that fact must be disclosed in the notice.

Be Careful with that Deposition Notice

When preparing deposition notices, California lawyers cannot simply do a copy-and-paste job. They have to do some homework:

If the answer to any of those questions is yes, it should go in the notice.